A Winter Adventure in Muğla with Ford Focus Muğla has always been in mind as a summer route. In his #FordileYolda adventure with Ford Focus; our travel blogger Seymen Bozaslan points up that Muğla should be considered as a winter route. Muğla is beautiful in all seasons! 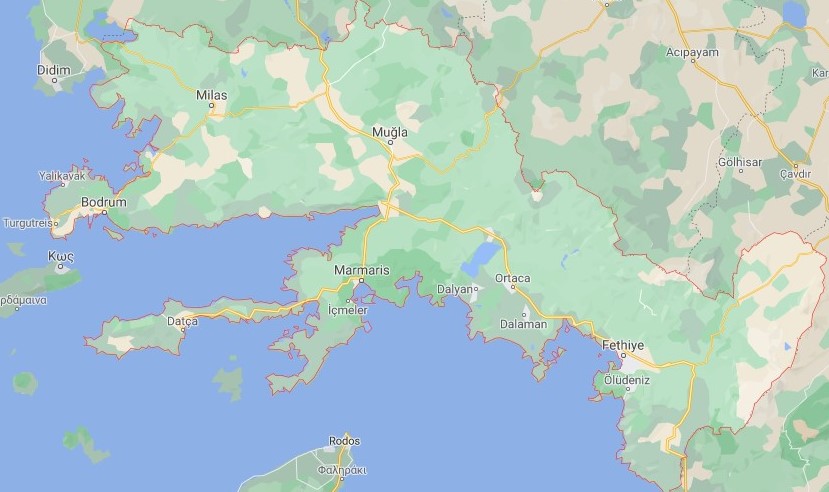 I think there are very few cities in the world that have such unique beauty. It is such a city that every point with sea-view is magnificent. This time on my #FordileYolda route, I would like to pass on the beauties of Muğla. I had the opportunity to visit Muğla 4 times in different periods in 2020, and now I wanted to have a visit in winter as well. I have compiled beautiful routes from flamingo birds to magnificent mountain landscapes and wonderful shores. Separate articles can be written for each of these places, but I have prepared a summary article for you. Shall we take a look at the beauties I photographed in Muğla together?

You know as you head from Ula to the south, there is a winding road where you can look down on Akyaka and Gökova. That is actually the place you understand the beauty of Akyaka. Located in the Gulf of Gökova, between Marmaris and Muğla, Akyaka has been a popular holiday destination in recent years. Çınar and Akyaka Public Beach are the two most popular beaches in Akyaka, which is one of the centers of kitesurfing due to its abundant wind, boat tours, and natural beauties. 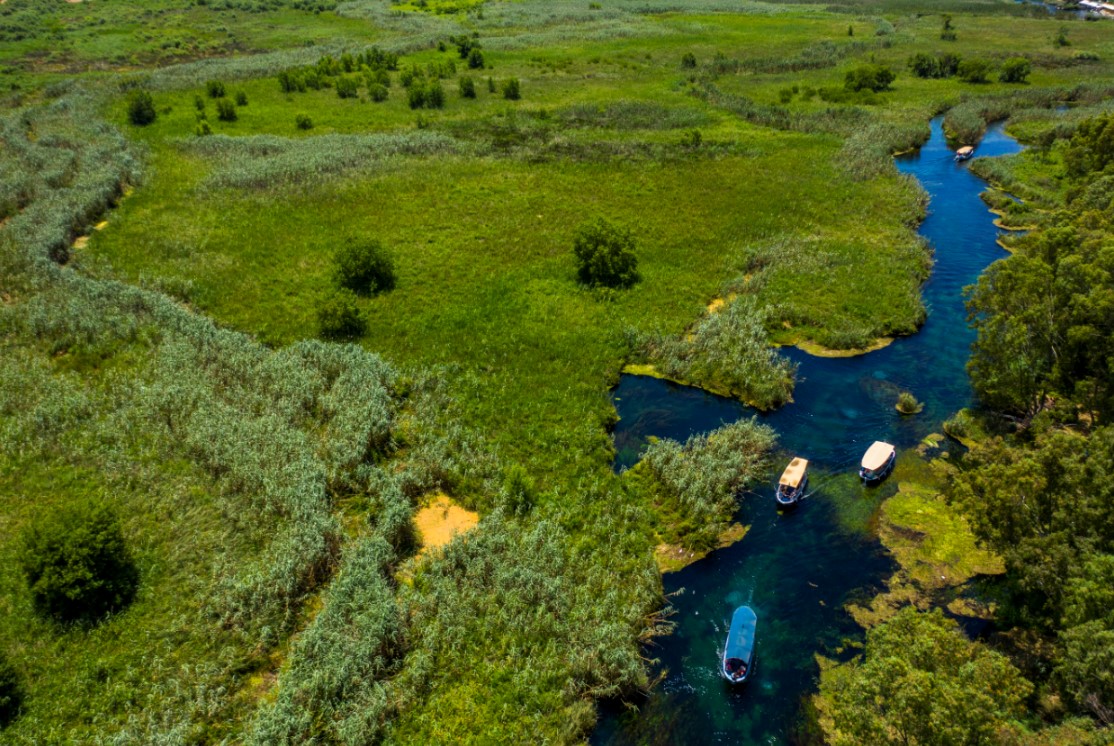 When you set out on a boat tour in the region, you can see special bays such as Akbük Bay, Küfre Bay, Ziraatçılar Bay, Lacivert Bay, Fener Bay, Turnalı Boncuk Bay, Değirmenbükü Bay and you can visit Sedir Island. In addition, you can relax with your family and even meditate if you wish in Yenice Valley houses, as it is an exemplary facility of natural life.

Bodrum and Milas districts, one of the most popular and touristic districts of Muğla, are one of the most important local tourism centers of the Aegean. So, what can we do in Bodrum? Let's start with the beaches. Articles can be prepared for Bodrum on their own. But if we summarize; Bitez Beach, Gün Batımı Beach, Yahşi Beach, Gümüşlük Public Beach, Kumbahçe Beach, Gündoğan Public Beach, Karaincir Beach, Maziköy Beach, Camel Beach are among the beaches to be visited.

If you prefer to take a boat tour around Bodrum, you can tell your captain these bays with the mind at peace. I am sure you will enjoy each of them separately. Cennet Bay, Torba Bay, Gerenkuyu Bay, Bardakçı Bay, Aspat Bay, Aquarium Bay, Kissebükü Bay, Orak Island, Tavşan Island. 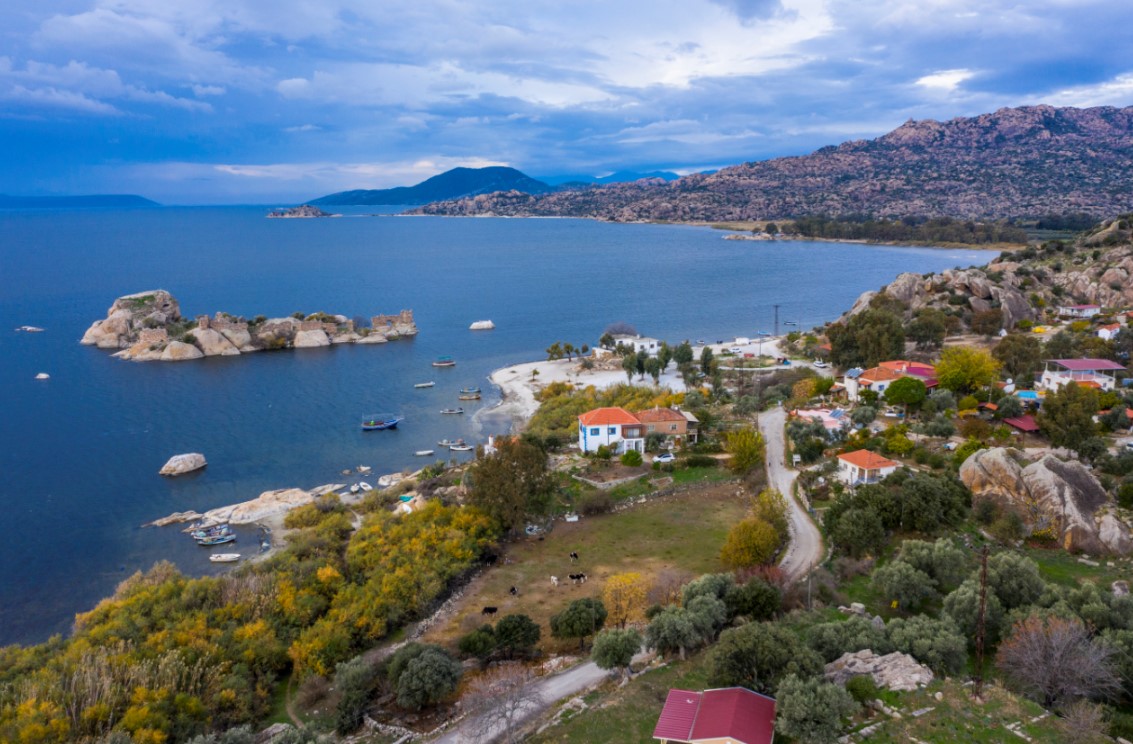 In addition, Bodrum Museum of Underwater Archeology, which is Turkey's one and only underwater museum; our sun of art Zeki Müren's house, also known as Zeki Müren Museum and Bodrum Maritime Museum are among the primary places to be visited in Bodrum.

I would like to talk about two important beauties in Milas. One is that you can watch the flamingo birds in Boğaziçi Village, which is close to Bodrum center. The region, where about 6000 birds can be found by location, creates a spectacular view, especially at sunset. Another place to visit in Milas is Bafa Lake, which is a lake that was actually separated from the sea due to the alluviums that blocked its way when it was a bay in the Aegean Sea about 2000 years ago, and Kapıkırı Village right next to it. Taking its name from the Ottoman emperors Selim I, Selimiye is still a holiday destination open to exploration and out-stands with its blue voyage. There are many islands in the region. Among these islands, you should definitely see Dişlice Island and Kameriye Island. When you come to Selimiye; Orhaniye, Selimiye, and Bozburun are the most preferred routes. The journey among in and out of nature-view and sea-view; is one of my most preferred routes in Turkey. 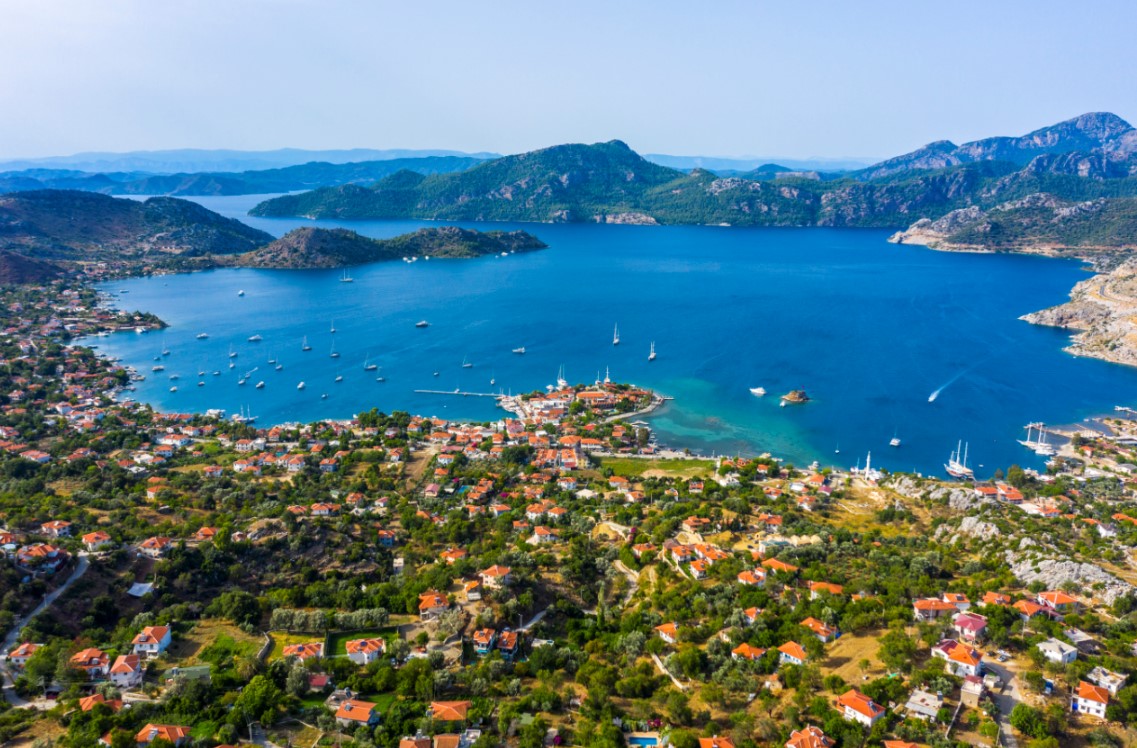 When you get here, I would suggest you not to return without doing two things. One is diving and the other is taking a boat tour. So go either under or over the sea... There are many agencies that offer blue voyage and diving services in the region.

Köyceğiz, Dalyan, and İztuzu Beach area are some of my favorite trip routes in Turkey. Especially in Dalyan, I don't know if there is anything that makes you feel as happy as watching the boats curl up among the reeds. The best place to watch this view is Çandır Village hill. You have two options to get there. One is to reach the lakeside by moving from the center of Köyceğiz, and the other is a 5 minutes travel to the opposite shore with the 2-vehicle capacity ferries from Dalyan center. I've tried both ways. The ferry option from Dalyan is definitely more advantageous in terms of time. When you come to Çandır Hill, there is a property owner with a private property sign hanging at the entrance, but he allows the visitors to enter. I think this private property may be the one with the most beautiful view in Turkey. Another place where you can watch this magnificent view is the hill above the İztuzu Beach entrance known as Radar Hill. Unfortunately, the roads of Çandır Hill and Radar Hill, which are the two most beautiful spots where you can see İztuzu Beach and Dalyan, are a bit bumpy. It is useful to use your vehicle carefully. İztuzu Beach, which has a length of 4.5 km, is also known as turtle beach. This beach is admirable with its golden sand and was awarded the best outdoor area in Europe in 2008 and the best beach in 2011. Apart from İztuzu Beach, thereabouts are also beautiful spots such as Kargıcak Bay, Ekincik Bay, and Aşı Bay. When you come around Dalyan, if you would like to swing on the stream, you can also visit Yuvarlakçay. You can take perfect souvenir photos that you can share especially on your Instagram account.

Kaunos Ancient City is one of the places you can visit in Dalyan. Many works from the excavations that started in 1966 can be seen and are open to visitors. The castle, city walls, churches, harbor, and famous rock tombs are open to visit for history lovers.

When you come to Datça center, there are three neighborhoods you can go to. These are Eski Datça, İskele, and Reşadiye. Especially, Old Datça and Reşadiye are the main places to visit as historic stone buildings can still be seen today. You can visit Can Yücel's house, particularly in the region known as Eski Datça, and make observations about his life.

Here, we can talk about blue and green a lot. When you come to the region; the most beautiful beaches where you can enjoy these colors are Taşlık Beach, Aktur Beach, Hayırbükü Beach, Ovabükü Beach, Kumluk Beach, Güllük Beach, Palamutbükü Beach, Kızılbük Beach, Gebekumu Beach, Kızlanaltı Beach, Karaincir Beach, Kurubük, Domuz Çukuru Bay, Akvaryum Bay, Lindos Bay, Sarıliman Bay, Armutlu Su Bay, Bencik Bay, Staircase Bay, Mersincik Bay. My suggestion to you is to visit the less crowded bays with the boats departing from Datça center depending on the wind of the day. Of course, at this point, we trust our captains. Knidos Ancient City is a place that you should not return without visiting. Knidos, one of the important cities of art and culture, is positioned as the meeting point of the Aegean and the Mediterranean, as well as the place where the first example of democracy was experienced. Since it is a sheltered port, it was once a port city where small ships always visited in order to provide food and shelter in stormy weather. The saddest issue to be told about Knidos, in which important studies in astronomy and physics were carried out, is that the works were stolen. In 1858, the British Charles Newton took the works that came into existence as a result of his studies under the authority of the sultan of the period to the British Museum in London with warships. Unfortunately, it is the sadness of Knidos that our works are still there.

Fethiye is such a rich place in terms of visiting that; when we say Göcek, Kayaköy, Kabak Bay, Ölüdeniz, Babadağ, the list goes on and on. Being the second-largest district in Muğla after Bodrum; Fethiye has created its own potential from scratch and is at the top of the most important tourism destinations of our country. In Fethiye, you can do both diving and blue voyage and you can experience many things such as paragliding and camping, and say I'm glad I'm here. 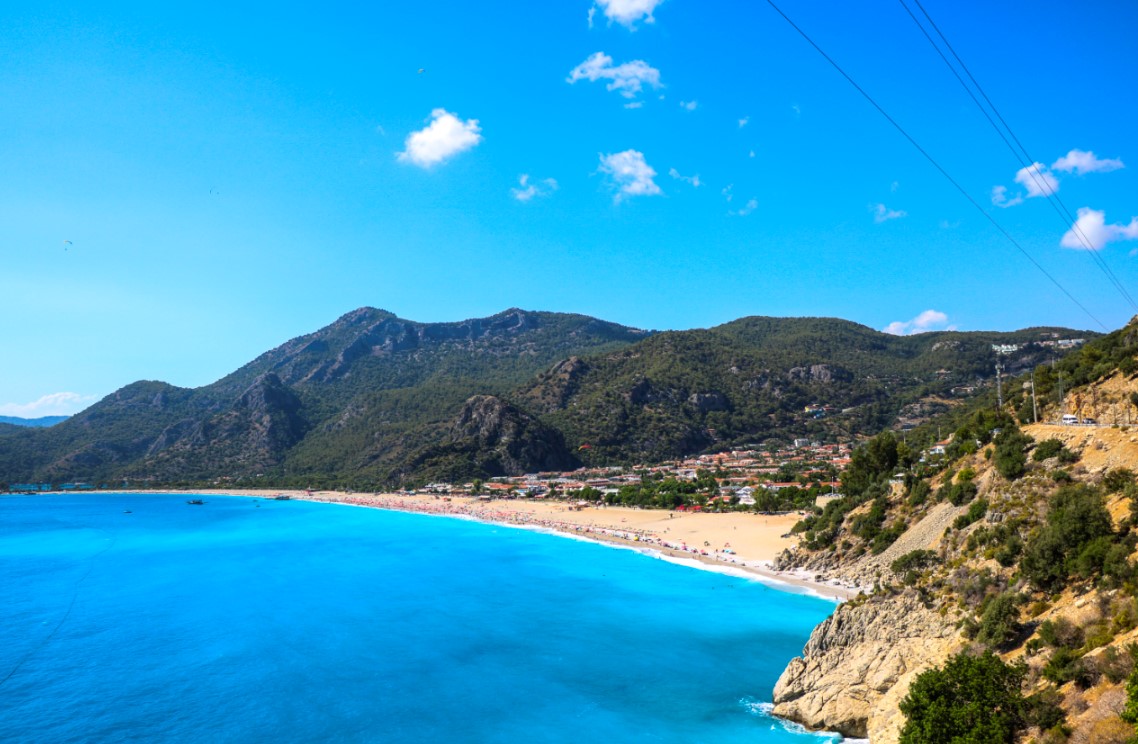 Ölüdeniz and Kumburnu are the top places to see in Fethiye. The region, which was chosen the most beautiful beach in the world in 2006, is among the favorite places of British tourists. In addition to the places to visit; Belcekız Beach, Çalış Beach, İnlice Public Beach, Kıdrak Beach, Karaot Beach, Kuleli Beach, Karataş Beach, Akmaz Beach should be at the top of your list. 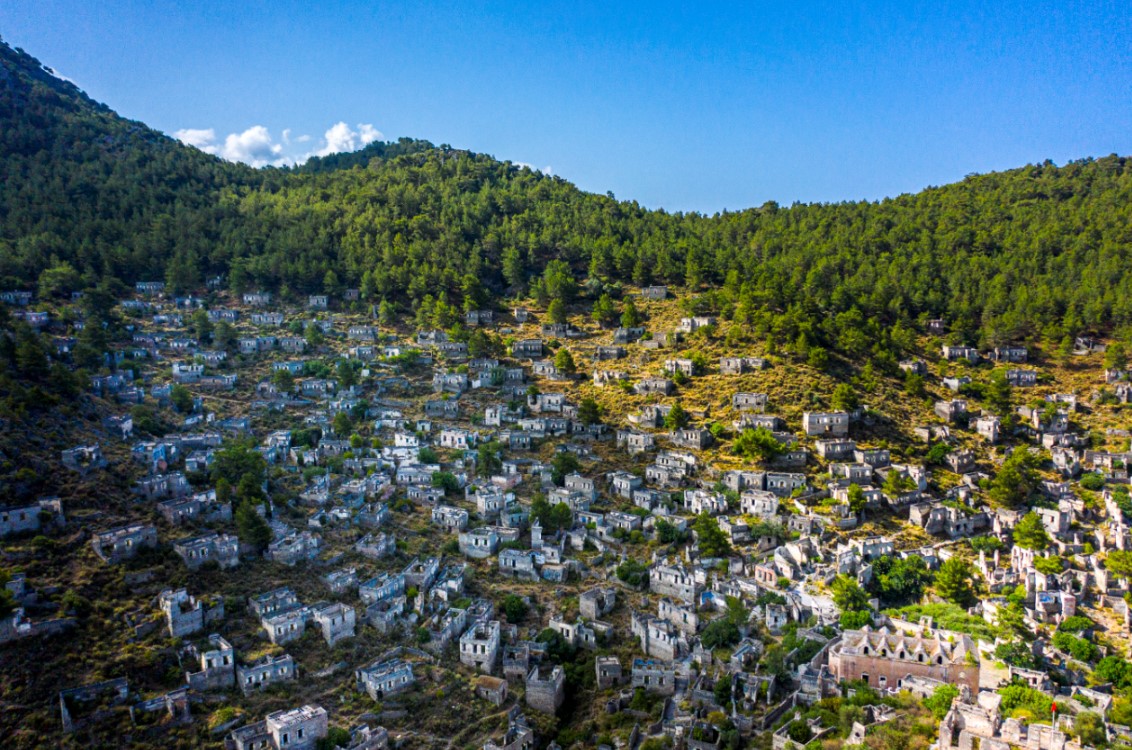 If you are going to take a boat tour in Fethiye, there are two important points. One is Yassıca Islands, which is in the Göcek region. Yassıca Islands is such a beautiful place that the region, which has a small lagoon, attracts the attention of photographers and impresses the people on boat trips. Another route you can take when on a boat tour may be around Ölüdeniz. Butterfly Valley, Kabak Bay, Katrancı Bay, Günlüklü Bay, Turunç Pınarı Bay, Büyük Boncuklu Bay, Şövalye Island, Gemiler Island are some of the natural beauty stops you can see and experience a blue voyage. 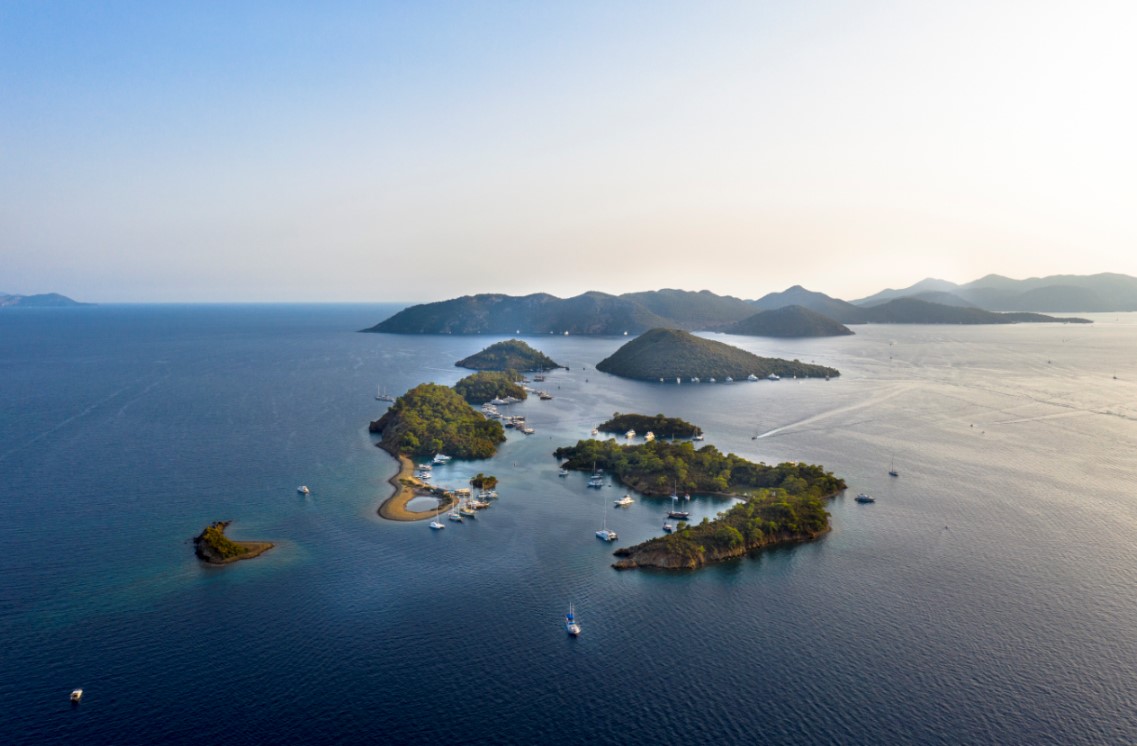 Marmaris being the first district that comes to mind in Muğla when it comes to entertainment, has the Old Bazaar, Castle District, Halıcı Ahmet Urkay Museum among the top places to see in the city center. There are also many beaches in Marmaris that you can reach by boat or land. Among the most visited places are; İçmeler Beach, the most well-known and beloved one; Turunç Beach, which is preferred for diving; Kızkumu Beach, famous for its 600-meter sand island; Cleopatra Beach, which is narrated as the beach where Cleopatra used to swim; Uzunyalı Beach, which is easy in terms of transportation and Kumlubük Bay known for its clear water.